The Story Of The Monument

The North Country Honors the Mountain monument was designed, built and unveiled on July 1, 2016 by the North Country community as an enduring statement of the community’s gratitude for the sacrifice and service of the 10th Mountain Division’s Soldiers, their Family Members and the Fort Drum Civilian Work Force.  Since its reactivation at Fort Drum in 1985, the 10th Mountain Division has been the most deployed unit in the US Army. The monument stands as a lasting tribute to the Division’s history and legacy for generations to come.

The Honor the Mountain Monument was built in Tower Square, the center-piece of historic and beautiful Thompson Park, a Fredrick Olmstead designed park, in Watertown, NY.  It is an important addition to the community and a visible reminder of the unique relationship the North Country community have with our military neighbors at Fort Drum. 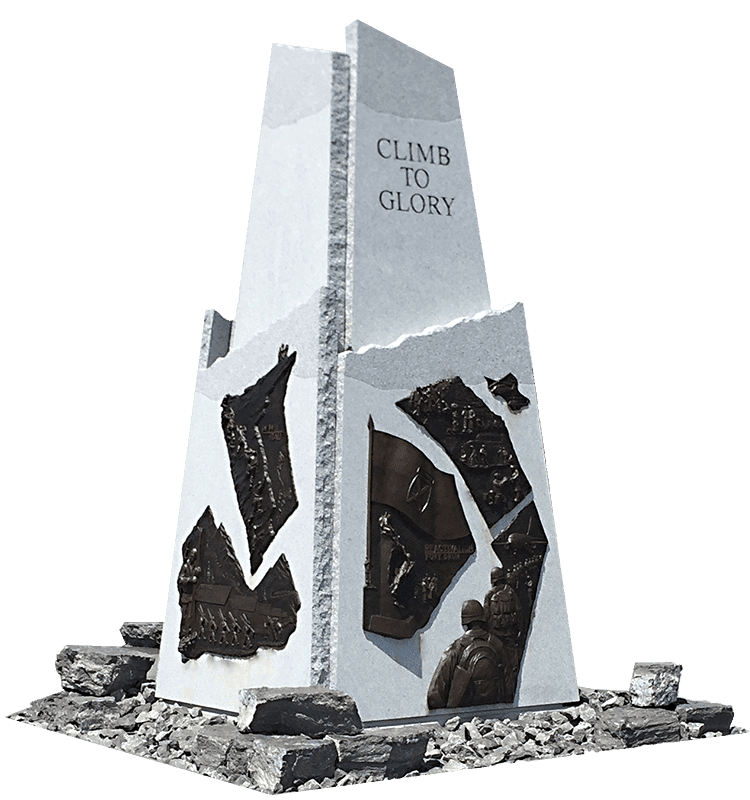 The monument has four sides and is shaped like a mountain rising from the ground with rough cut edges and jagged peaks.  It serves as a fitting tribute to the men and women who have sacrificed so much for our freedoms.  Through bronze reliefs and interpretive signage, the monument tells the story of the 10th Mountain Division’s history from its activation in 1943 to present day:

We intentionally left the fourth side blank without a bronze relief.  While 2016 celebrates the 31st year since the 1985 reactivation of the Division at Fort Drum, the year 2035 will mark the 50th anniversary of the reactivation.  We hope that a future generation of North Country citizens will commemorate that milestone anniversary with a fourth bronze relief depicting the Division’s continued history so that the next generation can fully appreciate and understand how much we here today cherish our relationship with the 10th Mountain Division and Fort Drum.  Additionally, they can unearth the time capsule that was planted under the fourth side. 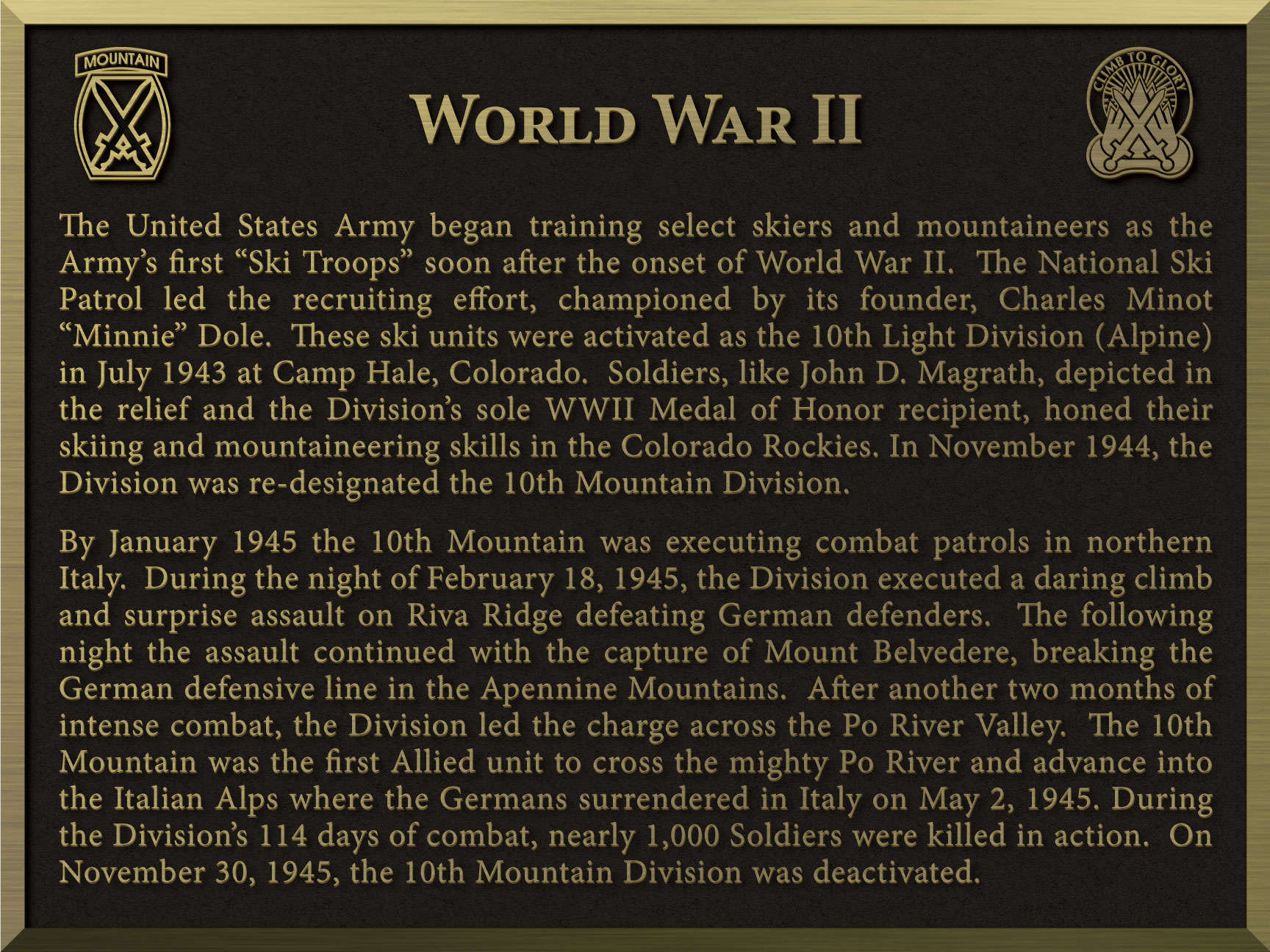 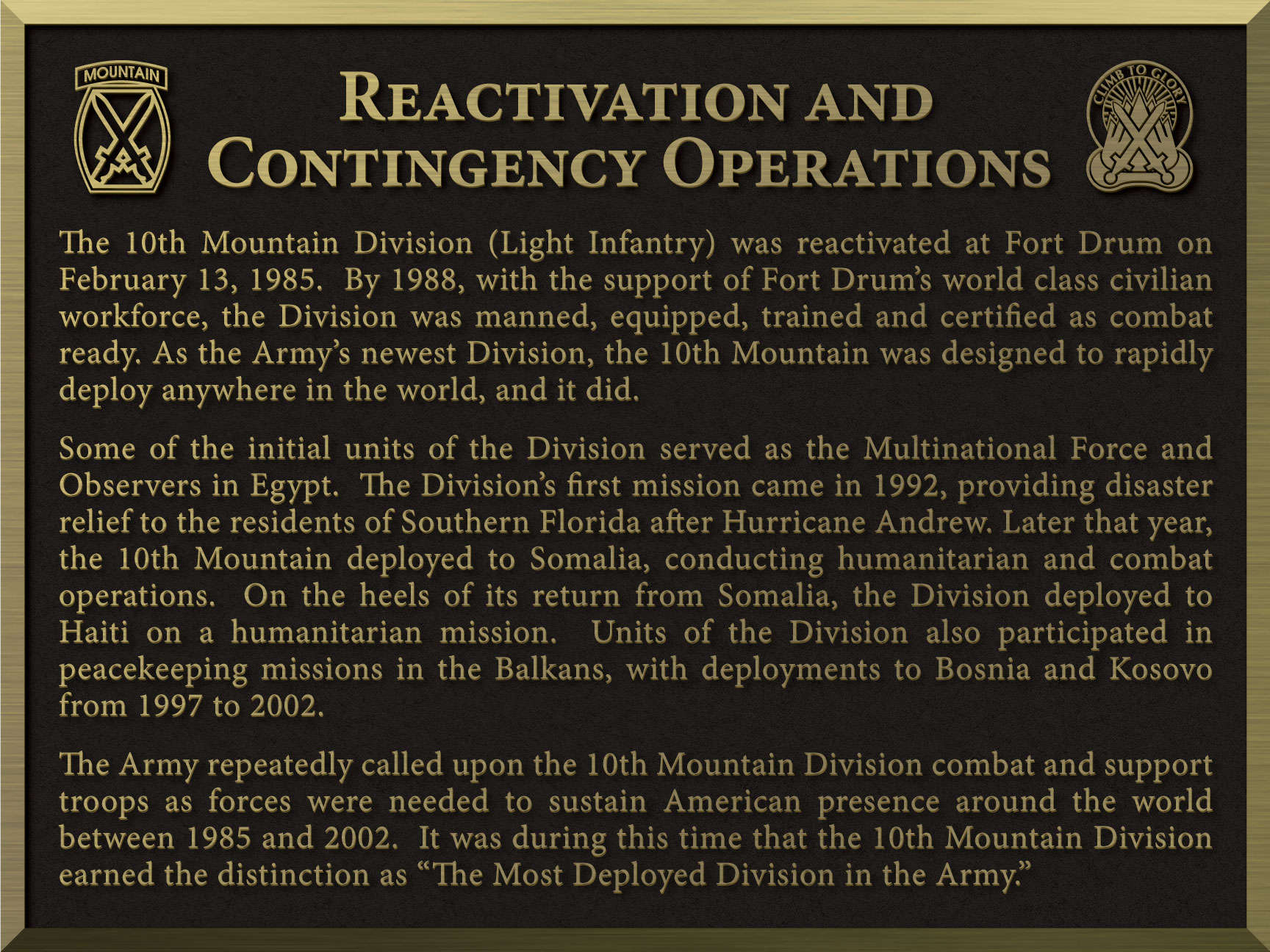 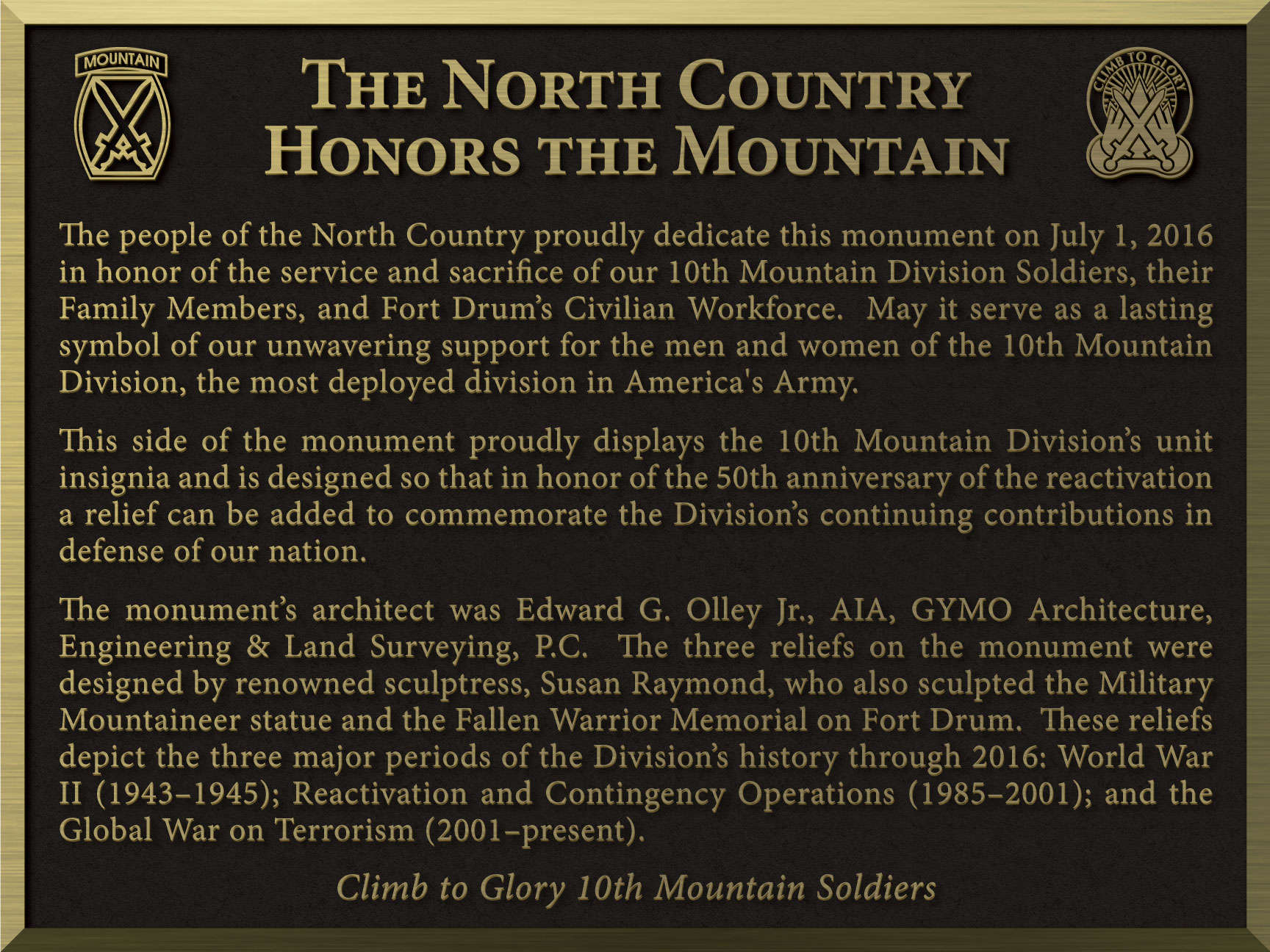 The Architect and Engineer

The monument’s architect and site engineer was Edward G. Olley, Jr. and the team at GYMO Architecture, Engineering and Land Surveying, D.P.C., Watertown, New York.  Ed generously donated his time, talent and resources to design a monument that perfectly captures the essence of the North Country Honors the Mountain committee’s vision for the monument.  His dedication to the division and this project comes as a legacy passed down from his father, Edward G. Olley Sr., a World War Two veteran of the 10th Mountain Division’s training at Camp Hale, Colorado and the Italian campaign in 1945.

The North Country Honors the Mountain committee was formed in the spring of 2014 with the mission to build a “permanent and prominent” monument in Watertown in commemoration of the North Country’s commitment and appreciation for the sacrifice and service of the 10th Mountain Division’s Soldiers, their Family Members and the Fort Drum Civilian Work Force.  The committee, a group of passionate and committed North County leaders, was chaired by Gilbert H. Pearsall, Jr. and it members included: Keith B. Caughlin, Mary M. Corriveau, Elizabeth C. Fipps, Judith L. Gentner, Ann M. McCann, Michael T. Plummer, Peter J. Whitmore and Thomas J. Williams.

Depicted on the monument are the three Medal of Honor recipients from the 10th Mountain Division: 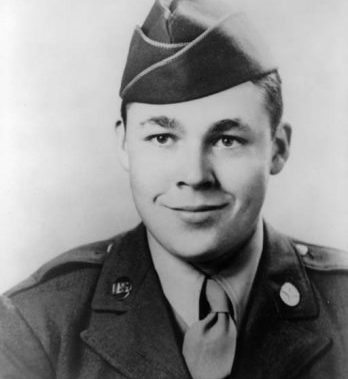 Private First Class John David Magrath: PFC Magrath G Company 2nd 85th Infantry, 10th Mountain Division posthumously received the Medal of Honor for his heroic actions and sacrifice of life during World War II in Italy on April 14, 1945. Magrath was born in the East Norwalk section of Norwalk, Connecticut on July 4, 1924. He enlisted in the Army from East Norwalk in March 1943. Highlights of his citation: PFC Magrath displayed conspicuous gallantry and intrepidity above and beyond the call of duty when his company was pinned down by heavy artillery, mortar, and small arms fire, near Castel d’Aiano, Italy. Volunteering to act as a scout, armed with only a rifle, he charged headlong into withering fire, killing 2 Germans and wounding 3 in order to capture a machinegun. Carrying this enemy weapon across an open field through heavy fire, he neutralized 2 more machinegun nests; he then circled behind 4 other Germans, killing them with a burst as they were firing on his company. Spotting another dangerous enemy position to this right, he knelt with the machinegun in his arms and exchanged fire with the Germans until he had killed 2 and wounded 3. The enemy now poured increased mortar and artillery fire on the company’s newly won position. Pfc. Magrath fearlessly volunteered again to brave the shelling in order to collect a report of casualties. Heroically carrying out this task, he made the supreme sacrifice.

Sergeant 1st Class Jared C. Monti: Jared Christopher Monti 3rd Squadron, 71st Cavalry Regiment, 3rd Brigade Combat Team, 10th Mountain Division posthumously received the Medal of Honor for his heroic actions and sacrifice of life in Afghanistan on June 21, 2006. Monti was born in Abington, Massachusetts, on September 20, 1975. He enlisted in the Army in March 1993. Highlights of his citation: On 21 June 2006, SFC Monti, then a staff sergeant, was the assistant patrol leader for a 16-man patrol tasked to conduct surveillance in the Gowardesh region. The patrol was to provide up-to-date intelligence, interdict enemy movement and ensure early warning for the squadron’s main effort. As nightfall approached, the patrol was attacked by a well-organized enemy force of at least 60 personnel. Outnumbered four-to-one, SFC Monti’s patrol was in serious danger of being overrun. The enemy fighters had established two support-by-fire positions directly above the patrol in a densely wooded ridgeline. SFC Monti immediately returned fire and ordered the patrol to seek cover and return fire. He then initiated calls for indirect fire and close air support danger-close to the patrol’s position. He did this while simultaneously directing the patrol’s fires. When SFC Monti realized that a member of the patrol, Private First Class (PFC) Brian J. Bradbury, was critically wounded and exposed 10 meters from cover, without regard for his personal safety, he advanced to within three feet of PFC Bradbury’s position. But he was forced back by intense RPG fire. He tried again to secure PFC Bradbury, but he was forced to stay in place again as the enemy intensified its fires. The remaining patrol members coordinated covering fires and he advanced a third time toward the wounded Soldier. But he only took a few steps before he was mortally wounded by an RPG. About the same time, the indirect fires and CAS he called for began raining down on the enemy’s position. The firepower broke the enemy attack, killing 22 enemy fighters. SFC Monti’s actions prevented the patrol’s position from being overrun, saved his team’s lives and inspired his men to fight on against overwhelming odds. 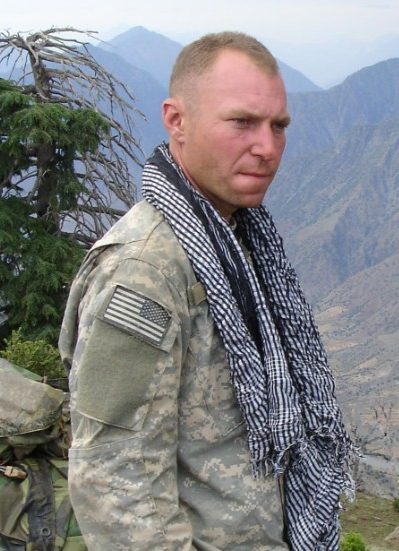 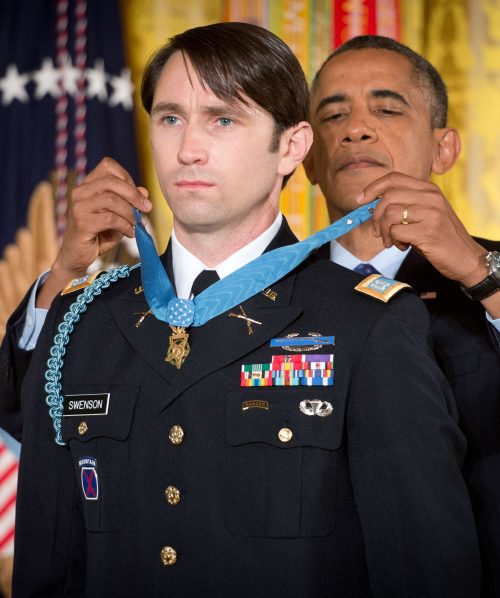 Captain William D. Swenson: Captain Swenson 1st Battalion 32nd Infantry 10th Mountain Division was awarded the Medal of Honor for his heroic actions in Afghanistan on September 8, 2009, 2006. Swenson was born in November 1978 and entered the Army in September 2002. Highlights of his citation: Captain Swenson distinguished himself by acts of gallantry and intrepidity at the risk of his life above and beyond the call of duty while serving as an embedded advisor to the Afghan National Border Police, in support of 1st Battalion, 32nd Infantry Regiment, 10th Mountain Division, during combat operations against an armed enemy in Kunar Province, Afghanistan on September 8, 2009. On that morning, more than 60 well-armed, well-positioned enemy fighters ambushed Captain Swenson’s combat team as it moved on foot into the village of Ganjgal for a meeting with village elders. As the enemy unleashed a barrage of rocket-propelled grenade, mortar and machine gun fire, Captain Swenson immediately returned fire and coordinated and directed the response of his Afghan Border Police, while simultaneously calling in suppressive artillery fire and aviation support. After the enemy effectively flanked Coalition Forces, Captain Swenson repeatedly called for smoke to cover the withdrawal of the forward elements. Surrounded on three sides by enemy forces inflicting effective and accurate fire, Captain Swenson coordinated air assets, indirect fire support and medical evacuation helicopter support to allow for the evacuation of the wounded. With complete disregard for his own safety, Captain Swenson unhesitatingly led a team in an unarmored vehicle into the kill zone, exposing himself to enemy fire on at least two occasions, to recover the wounded and search for four missing comrades. After using aviation support to mark locations of fallen and wounded comrades, it became clear that ground recovery of the fallen was required due to heavy enemy fire on helicopter landing zones. Captain Swenson’s team returned to the kill zone another time in a Humvee. Captain Swenson voluntarily exited the vehicle, exposing himself to enemy fire, to locate and recover three fallen Marines and one fallen Navy corpsman. His exceptional leadership and stout resistance against the enemy during six hours of continuous fighting rallied his teammates and effectively disrupted the enemy’s assault. 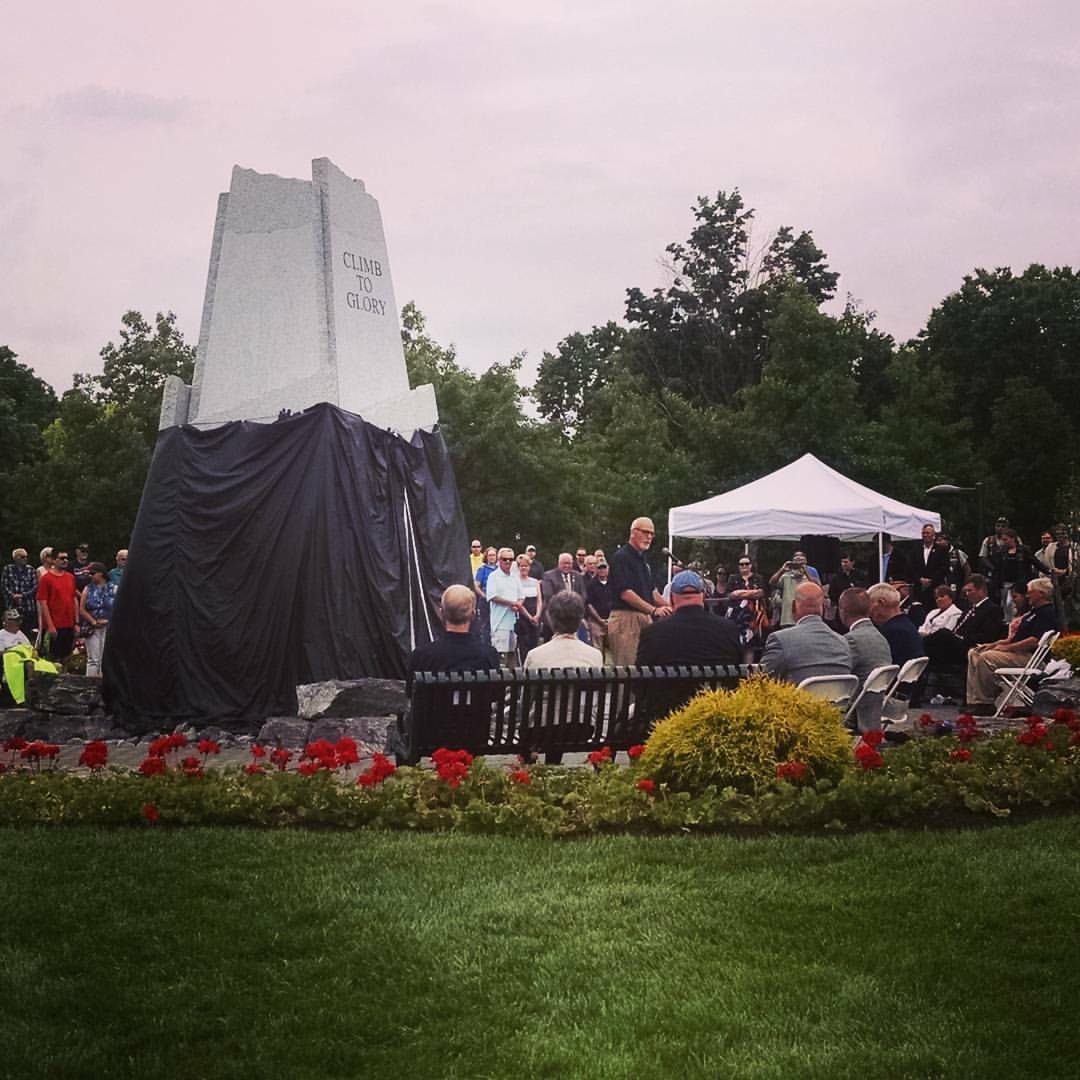 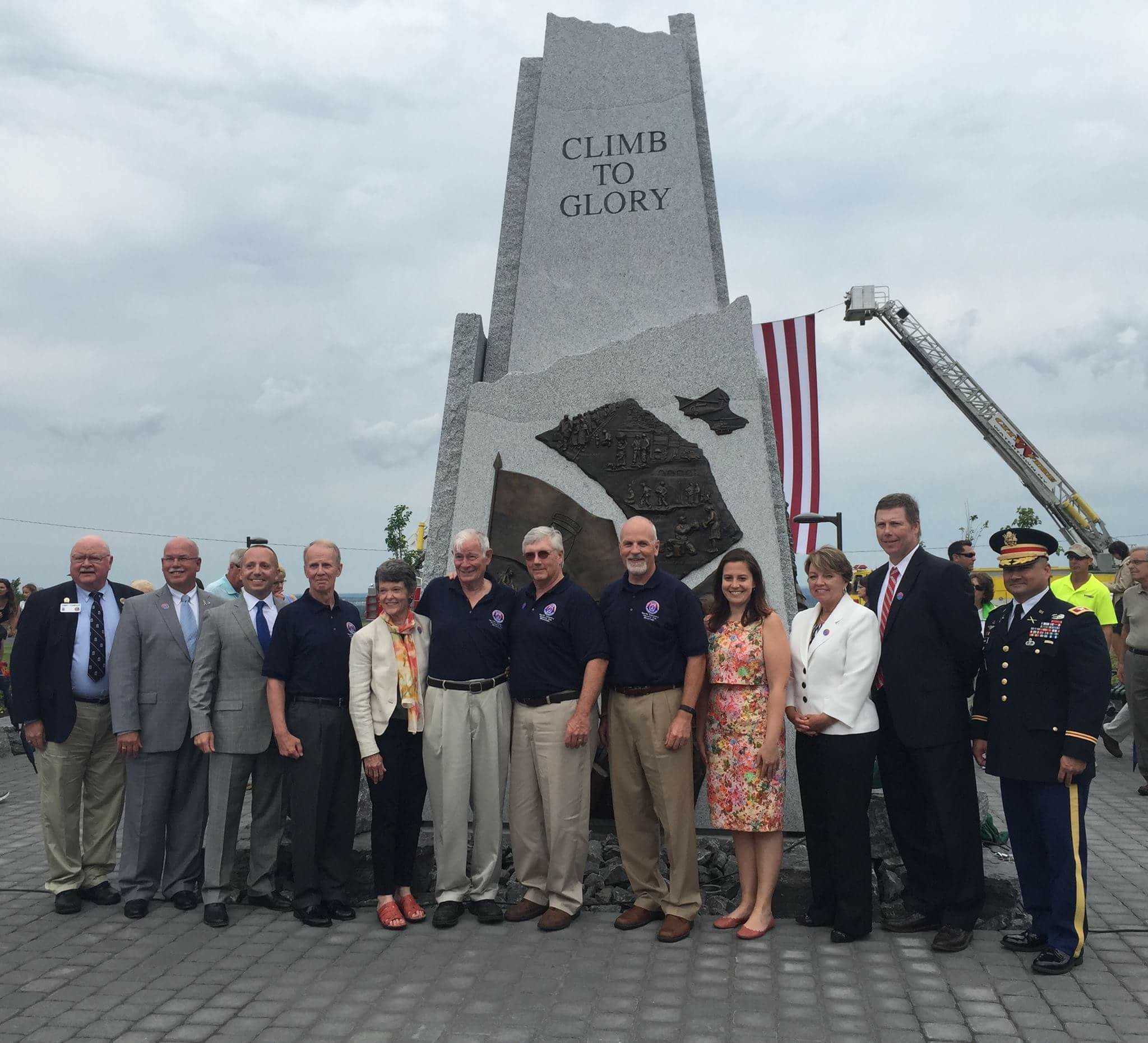 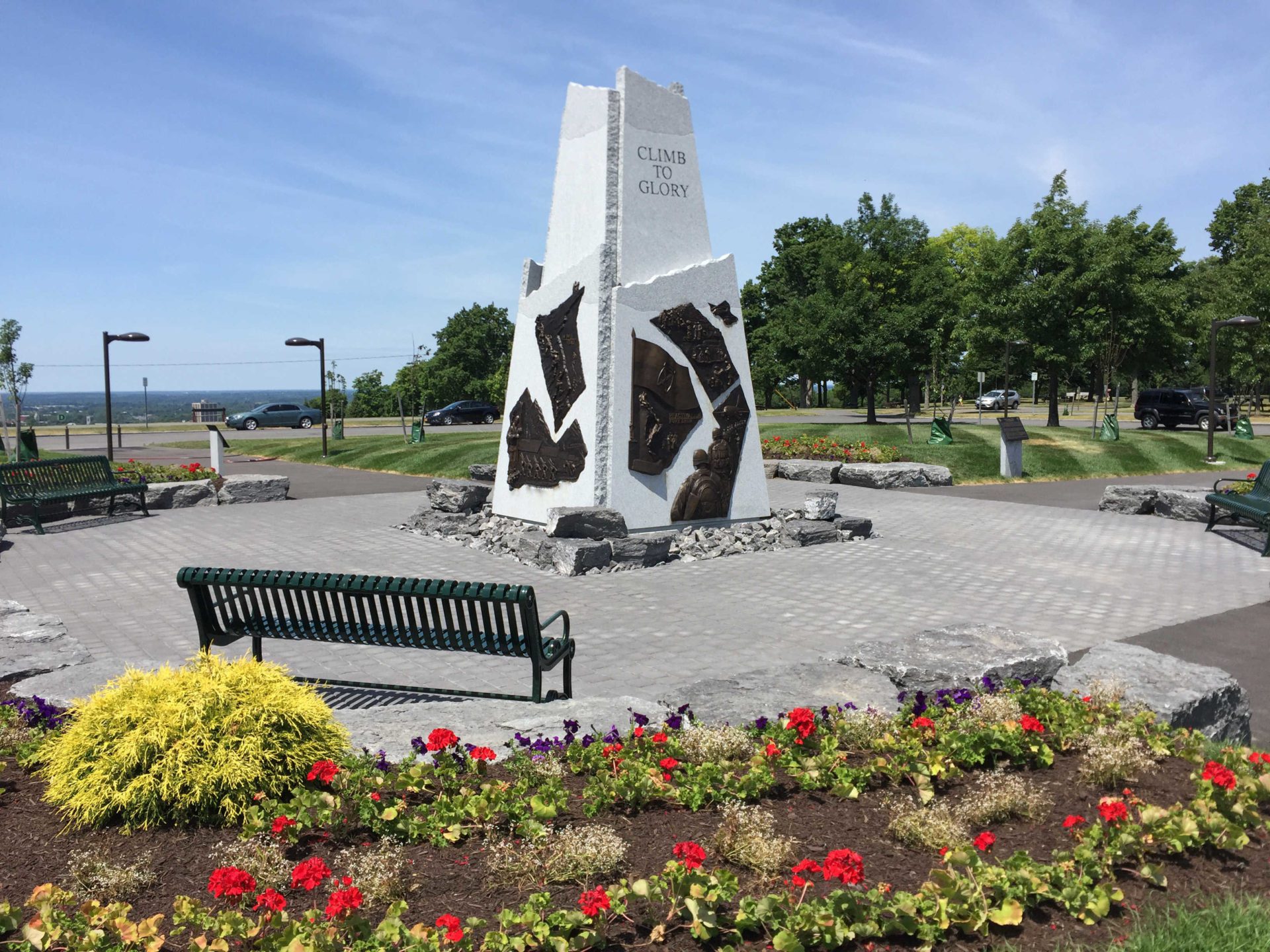 Honor the Monument with Your Photos.